Quote from: Whale Slippers on May 24, 2020, 05:23:46 pmHad a strange bug happen using Mednafen in a fresh save and using a clean ISO as per usual. The issue didn't appear while using pSX, though, so I'm not quite sure what the problem is. 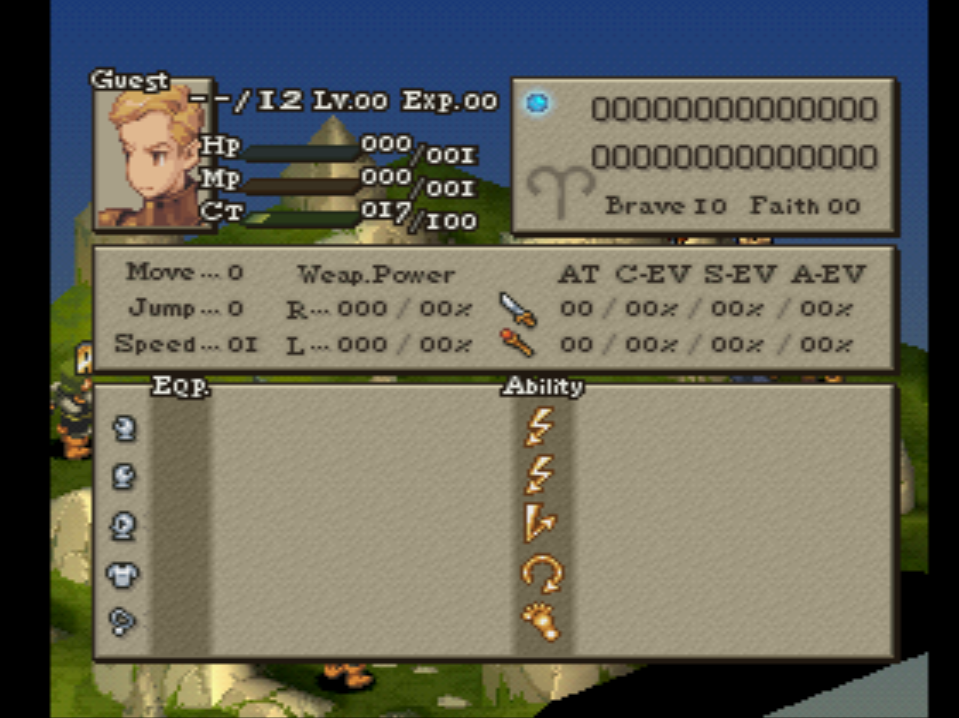 That would have to either be an issue with your image file or the emulator itself, ive never seen that happen in a battle before and no one else ever reported an error like that
3

As for the conflict, someone would need to move the ASM, likely pride
4

I dont have one. Everything in this patch, consolidates without affecting vanilla at all. Something like consolidating bio, would have to be done by people using it, since it can affect gameplay
5

May 20, 2020, 07:14:51 am
I've just released this merged into TLW. Tomorrow night I will do another run through of the vanilla game with consolidation, and then I'll upload a purely vanilla versiom here as well
6

News / Re: The Lion War Released!

May 20, 2020, 06:55:14 am
Version 1.06 of The Lion War, is now live! Download and patch to a new clean image and then you should be fine to load your hardsaves (not savestates) to see what was fixed, visit the bug reports and current version changelog thread HERE

You can also get the resources for version 1.06 HERE

Be sure to read up on the changes since there was not only a bunch of fixes, but a ton of consolidation done to free up even more space for more jobs, skillsets, and more!
8

May 20, 2020, 06:51:26 am
Version 1.06 of The Lion War, is now live! Download and patch to a new clean image and then you should be fine to load your hardsaves (not savestates) to see what was fixed, visit the bug reports and current version changelog thread HERE
10

Quote from: Gaffy on May 19, 2020, 07:29:14 pmSo I've tried to download these resources but it keeps saying Failed - Virus Detected?  I could download to patch in the other thread just fine, but for some reason this one keeps getting flagged.  Any tips on what to do to help solve this?  I just run regular windows defender or w/e.

For some reason windows detects cdprog as a virus. As of the next update, in a day or two, cdprog will no longer be included, to avoid any confusion
11

Quote from: AdmiralHabibi on May 16, 2020, 12:29:06 amso can I use that formula and use it on another patch? is the formula changed from the original? like what are the main changes on the skill on TLW?

Yeah that was kinda why i figured youd wanna edit it a tad, after recording it it is quite long. Durbs almost
14

Aliste joining is finished, Nyzer may or may not have some fixes now that it's in game, but that's easy stuff. Next will be the Cloud v. Sephiroth battle, then the Duma battle.

Added this to the OP, updated the images and added another spoiler with the sidequest layout from TLW, with WIP edits to fill in the new sidesuqests. Anything in RED, is new.
15

Don't the Alama and Malak always dead sprites have a different pose for dead status that's specifically used for their death events? How did you get around this?

Malak is either normal dead pose, or EVTCHR, assuming the former, since it's a battle event.
Alma has a custom pose on her spritesheet. I didn't remove this spritesheet from the list, and she is still linked to it, just with a different job now.

The special snowflakes hack allowed me to set both of those units to dead, in those battles, so they appear the same as they would in vanilla
16

May 14, 2020, 07:30:01 am
Something I've wanted to put together for a little while. This patch, (which also includes Celdia's Item Attribute and Inflict Status Consolidation Patch) fixes the Tutorial units, Undead units and Dead Units in the game, such as the undead knights in the Zalera battle, or Alma/Malak during the battles they are unconscious in. Using Xifanie's Special Snowflakes ASM, I was able to give these specific units the statuses they needed to still be vanilla, while being able to give them standard jobs instead of wasting job space by having a duplicate job with 1 difference like dead or undead.

At the same time, I have gone through and removed any job that is never seen in battle in game, and consolidated a few others into each other where we were able to do so. I've also done this with sprites and skillsets. As of now, this should be the most space we've freed up for more things in FFTP, I'll also include a premade version of Xifanie's extra abilities and Effects sheets, which will free up an additional 4 ability slots, and possibly consolidate the Bio abilities as well.

Currently, this is where we are at. I just need to do a quick run-thru the game this weekend to ensure everything is working as intended, which it should be, then I'll release it.

The current version is only for vanilla FFT. However a TLW version will be coming out when the next update for TLW comes out soon.
17

May 14, 2020, 04:51:47 am
This tool is fucking amazing, it allowed me to do in about 3 hours tonight what would have taken me weeks to do otherwise, and without error, probably months!

Savestate editing is how you easily test events. IIRC it helps to save your savestates right there in the EVSP folder. Start your event with Pause() and use that moment for your initial savestate.

This is how i event. Expecting their to ever be a event viewer and also having it be under a gig in size is unrealistic
19

Journey of the Five Ch.1 / Re: Chapter 2 Progress Log

Quote from: Heisho on May 11, 2020, 11:05:35 pmHey Elric where did you get the sprite for the knight between Balthier and Wiegraf? I'm interested on that one.