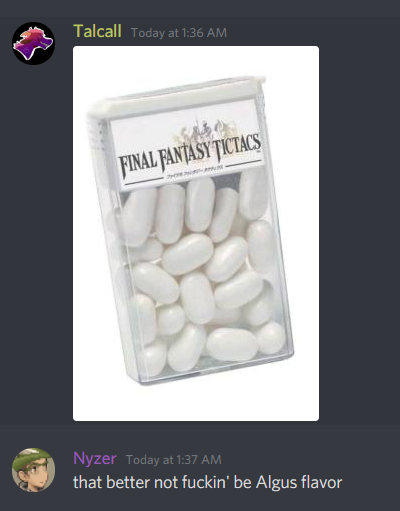 Last post by Pride - Yesterday at 09:14:52 pm
Been a long time for a post but I come baring gifts. Bug fixes for Charge gains unique status effects (which now also can inflict status like Formula 2D) and Weapon Range and Others Disable Movement which fixes some issues it had with performing.

Attribute Rewrite 2.03
Download spreadsheet here.
Please report any found bugs to me in Discord, in this thread, or through PM! Please! I'd like to make sure this hack is as bug free as possible.
80 new attributes can be used! x50 - x9F are editable and working in game.
Abilities can be assigned attributes! Fire Eater, HP Boost, Brave Up, and more are now all possible effects for R/S/M.
Brave, Faith, HP, MP, and Class Evade to be attached to items/abilities as attributes.
Reactions, Supports, and Movements are now part of the attribute table and can be assigned to items/abilities.
Equippable items are now defined in the attributes as a result, Equip Armor/Shield/Sword/Knife/Axe/Crossbow/Gun are all defined within the attribute table (attributes x50 - x57 have been defaulted to this) and items can be given these effects.
Move 2/3 and Jump 2/3 are assigned Attributes x58 - x5B.
Item Sets Bonus can be set up in the Item Sets tab which give the attribute defined to the unit when all the items are equipped. If you don't want to use all 5 item slots, use xFF and it'll ignore that item for the unit.
Negative Stat values for PA, MA, Speed, Move, Jump, Class Evade, Brave, and Faith are allowed.
??? Units with equipment no longer have their HP and MP reverted back down to 999.
The attribute page in FFTPatcher should not be used, especially after patching Attribute Rewrite 2.0. Only use the spreadsheet to change attributes now.

This replaces Attribute Rewrite 1.1 and Move+/Jump+ edits and have been hidden in Pride.xml.

Damage Manipulation Supports
Creates 6 new supports to add into the game. If you don't want one to work, leave the data as 0 and it will disable the new functions.

Equipment Evasion Settings
Rewrites the Physical Equipment Evasion Routine (0x80184F9C) and removes the need for the Magical counterpart. Also includes Choto's "Evade Boost" as that increase Accessory evade by 10 if the R/S/M is equiped to avoid obvious conflict issues.

MP Cost Supports
Creates 3 new Supports: Turbo MP, No MP Cost, Blood Price. Turbo MP defaults to double MP Cost and increase Magic Damage/Accuracy by 1.5 but these values can be changed with the variables. No MP Costs disables the cost of casting spells. And Blood Price uses HP to cast spells when out of MP. Default is 1:1 cost but in FFTA it doubles the cost of the spell to use HP. You're choice how you want this to work.
The Multiplier works by Value * Cost(or Damage) / 256. So a value of x0080 would be half or x0100 would be value * 256 / 256 (dont change).
Use the unit data chart below to see what ability you want to tie each to. If you don't want to use one, leave the Bit as 00.

Quote from: Mustardio on Yesterday at 06:47:51 pmAnyone have any suggestions on how to flag bombs as items for chemist throw item use?

I was messing around with FFTPatcher and can't seem to get it to work.

I'm beginning to think its not possible.

Items and Throw are hardcoded to use their respective items and item types (or perhaps item ID ranges). You need to find where they're hardcoded. If anyone knows it will be on the wiki, search "item hardcoding" and "throw hardcoding".

I do know that in the lower portion of the ability table in FFTPatcher, every ability from 0x170 Potion on down is part of the same table. You can see this by editing Phoenix Down "Item Use" and Shuriken "Throwing" in the Abilites tab of FFTPatcher, then looking at the gameshark code tab. The addresses of the gameshark codes (which are just RAM addresses with a prefix) are almost right next to each other... almost, because there are two unused entries in that table for Items 0xFE and 0xFF.

While every item from 0x170 Potion on down is part of the same table, the number of bits per entry and of course the programmed context of each entry varies. You need to find the code that determines the context and modify it

QuoteAlternatively does anyone know how I can convert one of the lesser used items into a bomb-like item and keep remedies as all-purposes status cure.

You could try giving items different formulas and see what happens with different Z values. If that doesn't work, then you can change items to inflict statuses rather than cure them in the Items tab, then change the animation effect in the Abilities tab. Mosfungus bomb inflicts poison and so on.

If you do this, let us know what works and what doesn't.
4

Last post by Mustardio - Yesterday at 06:47:51 pm
Anyone have any suggestions on how to flag bombs as items for chemist throw item use?

I was messing around with FFTPatcher and can't seem to get it to work.

I'm beginning to think its not possible. Alternatively does anyone know how I can convert one of the lesser used items into a bomb-like item and keep remedies as all-purposes status cure.
5

I saw Kuro's post about the Item offsets, but I don't really know how to edit anything about items. Specifically, I'm just looking to change the pricing of items. Not something that's possible in the Ability editor or anything. I've watched a couple youtube videos (Script kitties) on hex editing, but I would appreciate any help anyone can give me, because right now, it's pretty much another language. Also willing to accept some tips about hex editing in general lol.

Will update if I figure out how.
Thanks for the help in advance.
6

New Project Ideas / Re: Built from the ground up F...

New Project Ideas / Re: Built from the ground up F...

PSX FFT Hacking / Could use some feedback on a r...

Last post by ParryPupPup - June 17, 2021, 06:16:29 am
Loved this game since I was a kid, and I love that we have been gifted the tools necessary to mod this game's to our heart's content.
Well, as a sucker for this game, I once bought the War of the Lions for the PSP years ago before it was lost somewhere to annals of time and being moved from place to place for years.

So, I thought "I wanna relive the magic of this story and this gameplay", but the War of the Lions script is... so god damned flowery and overstuffed with Purple Prose I have - no joke - spent ten minutes trying to dissect what the bloody hell they're saying. I should not require a thesaurus and a dictionary pulled up just to understand a sentence.

So then it occurred to me, "Do it yourself. Rewrite it yourself. Be the writer you wish you could have been on the script team." So for the past half-year or so, give or take a couple of months, I have started rewriting and rescripting a lot of the PSX's scripts and dialogue.
Trying to modernize it (Really? Knave? God it hurts to read some lines) while changing a few things in terms of story beats but keeping the core story intact while also trying to give a little more flavor to the characters. (I.E Tietra being the nagging, annoying little sister to Ramza by stealing his art supplies to blackmail him into watching the sunset with her)

For example:
Algus: If I were you, I wouldn't put much faith in Dycedarg being delirious.
Ramza: What do you mean?
Algus: If it were me, I'd let the lamb be sacrificed.
Delita: What did you say?!
Algus: Too poetic? Sorry, I forgot commoners are illiterate. I said she's not worth saving!
Delita: Fuck you!!!
[Slugs Algus' face]

And from the same scene
Algus: They're at Fort Ziekden. I heard it from your brother.
The fortress is heavily guarded from the front, naturally and artificially.
Your only option is a rear assault. Best of luck with your little lamb.
God, I fear for your bloodline if you decide to sire a child with her.
[Ramza blasts him with a non-lethal amount of lightning before throwing him out]

And some minor things like Gustav Margriff being impaled not having an interrupting "U...ugh" there's a brief pause but he falls to the ground sooner, and during the scene where Delita strikes down Chancellor Gelwan, there's less time spent before he draws his sword and swings it before Gelwan pleas for his life and then tries running. I felt, personally, that little change gives a more grim light to Delita and how ruthless he's becoming to the nobility.
Other changes include introducing the mystery of the Zodiac Stones a bit earlier with Delita being saved by the Sagittarius Stone that Tietra had on her person (the how that comes to be I'll have to think of later) but also changing the Stone's backstory to help with the narrative I'm writing of the Stone fleeing Delita after being able to save him from Tietra's selfless wish for his safety (The Stones have different powers, they're not all universally able to revive the dead) to spare him being seduced by the Lucavi Demon locked within the Stone.

I'd love some feedback though, I've gotten up to the battle with Zalmo in Lesalia, nothing's finalized, it's all up to change with new knowledge of how to work the dialogue boxes and some of the scripting, but I'd love to hear some feedback.

If you want to check it out for yourself, I have two videos of a rougher draft of some scenes up to about the Algus expulsion from the Beoulve Manor
https://www.youtube.com/channel/UCSSHMWBS_J1oFJNaY4FyaUw here.

And if you want to check out the scenes up to Lesalia's fight in chapter 2, you can insert the EVT to an ISO patched with The Lion War patch by Elric and his team. Without their considerable work consolidating events like they did, I'd have to have worked a lot harder and I cannot thank them enough for letting us use The Lion War as a base patch.

Celdia
Allowing merge of her ISIA patch for Consolidation.

Works in Progress / Re: FFT the Durai Records (Wor...

Quote from: Nyzer on June 16, 2021, 01:37:55 amBecause the player doesn't get to build Delita up.
TLDR, In other words, Ramza is a blank canvas because you will spend the entire game painting that canvas, and if you do it right, he will end up being many times more powerful than Delita.

Wow. That's awesome, didnt look it that way. Thanks

Quote from: Elric on June 15, 2021, 09:00:33 pmYou need to be a whole entire buttload more specific... We have tons of mods that do tons of things. Take a few minutes to actually look at the mods hosted here. THEN if you can't find what you are looking for, make a more specific post.

Right. I was looing for some massive overhaul of the games lore and story and mechanic, while maintaining the theme and the gameplay. Wow, maybe I should, found one, try the Journey of 5...?
Pages1 2 3 ... 10