September 19, 2021, 07:50:05 pm
Posting it here, even though we were discussing in the ASM discord channel.
There are situations where the recoil damage from Abyssal Blade (and possible Unholy Sacrifice) do not trigger the recoil. Pride had some thoughts on what might be causing it.

Also isn't Abyssal Blade supposed to use the Earth Slash animation, not Kiku?


No one has mentioned wanting to fix this and it's not something that would make me make a 2.03. The effect on Abyssal changed, as the range is no longer the cone shape from WotL.
-Elric
2

September 19, 2021, 11:49:21 am
Not sure if a bug, but Raijinili and I were testing some things, and it looks like the Dark Knight Sturdy reduces healing in addition to damage. It affects Murasame (healing draw out) and seems to affect Cure magic as well. (I had super low faith on the targets I was testing, but it still reduced it by 3 with neutral zodiac compat).

Raijinili checked and Shell, Magic Defend Up, and Vehemence do not seem to impact these healing effects.


While a bug, it is related to Dark Knight being a generic class, and possible to get (while rare) at random. This is also related to the fact that the Generic Dark Knight class, can equip it's own class as a secondary. There are currently no plans to fix this.
-Elric
4

Malak got a slight rework, Beowulf gained some utility, elemental weakness is not as potent, and end-chapter slow text image duration is faster to match the sped up text.
Also many various bugfixes, balance adjustments, and tweaks.

December 16, 2020, 11:06:06 pm
Definitely sounds like an emulator issue. Specifically, I think you are missing a playstation bios for the emulator. This is typically required for proper memory card usage and not having one in the proper location for the emulator will cause various memory card issues.
7

The game is mostly vanilla. However many jobs are changed and rebalanced. There are two jobs which have been completely replaced: Mediator and Calculator.
8

Quote from: Aiolon on May 01, 2020, 12:46:07 pmThis has caught my eye. I have tried making this work and i have failed every time. there are NO defensive values in this game. Zodiac compatibility plays a very important role as a mechanic. So much that a large part of the game balance is affected by it.
I am really interested to see how you worked it out.

Believe it or not, I found Zodiac compatibility to cause excess randomization of damage (and other things) on numerous occasions, allowing for unusually high damage output if min-maxed. Removing it gets rid of the artificial "randomizing" of buffs/damage/healing and allows you a stronger foundation in building a decent team and promotes changing up strategies rather than being locked into a particular setup because of your zodiac signs.

Also, Protect/Shell/Regen and Defense Up / Magic Defend Up are defensive components that should not be ignored.
11

Quote from: Bonesy on April 29, 2020, 12:10:45 amI am interested but it not working in Mednafen is kind of a pain for me right now. Anyone able to poke around and figure out why?

So I don't know definitively what causes it to not work with Mednafen. It's likely one of the ASM hacks I use, but I don't know for certain. I haven't had much time or a huge desire to delve into what might be causing it yet. But since there's so many emulation options out there, I wasn't worrying too much about it yet.
12

April 28, 2020, 09:51:19 pm
Cerabow's Mod
A rebalance patch for the PS1 FFT which buffs underpowered skills, nerfs overpowered skills, and aims to create a more balanced, interesting, and slightly more challenging experience. Thousands of changes have been made across the entire game.
Find out more
https://ffhacktics.com/smf/index.php?topic=12487.0
Please click here before posting a review
13

The Info
A rebalance patch for the PS1 FFT which buffs underpowered skills, nerfs overpowered skills, and aims to create a more balanced, interesting, and slightly more challenging experience. The mod takes inspiration from several other projects and weaves in a number of different core balancing concepts.

FFT Cerabow's Mod includes a rebalancing of the entire game, including buffing underpowered skills, nerfing overpowered skills, and many other changes. The mod is not designed to be a difficulty hack, but instead fixes numerous issues with the original and opens the door to a variety of new strategies. Overall, units have more HP, deal less damage, and it's uncommon for 1-hit kills to occur. The enemy AI has access to far more skills than they did in vanilla, so just because you petrified half their team doesn't mean they won't remove it and then hit you back with it. Various strategies which were overshadowed by broken skills in vanilla are now very viable in the game now. Bosses which previously had laughably low HP now challenge your ability to setup a party for an enduring fight. Healing and MP restoration are nearly a requirement now in some form, and status effects can easily swing the tide in anyone's favor. Grinding for skills is not nearly as necessary, as the JP cost of skills have been drastically reduced, with many basic skills only costing 20 JP, and the strongest abilities in the game costing a maximum of 500 JP. The in-game help text has also been updated drastically to provide the player with as much information as possible, including hinting at whether an ability is physical or magical, or if it uses Faith at all.

In general, there are WAY too many tiny changes across the entire game to specifically mention. Some big highlights are:

Several "challenge" runs have been completed with the mod, including 4/5 magic class focus (only one unit using "physical" job classes), 100% physical classes only (and item), Squire and Chemist only plus Agrias, and more. Challenges like Archer Solo Single Class Challenge (SSCC) are likely impossible with the mod or are at the very least not fun.

This mod has been in development on and off since 2009. Between July 2018 and December 2019 it underwent extensive closed-beta testing. Closed beta testers had their names added to the FFT random name pool. They might show up in battles and try to kill you! It is currently in open-beta as of January 2020.

The Contributors (Whether they know it or not)
I did not make this mod by myself, but I compiled it alone. Below is a list of everyone who made something I used from the FFHacktics website and I want to do my best to give credit where it is due.

I want to specifically call out Xifanie, Elric, and Celdia for their help with some of my questions!

Thanks to everyone who made the easy-to-use tools to help mod FFT!
Xifanie
melonhead
Glain
Ganon
RavenOfRazgriz
Starbee
Paradox
TWoeMS
Mr 273
victoraldecoa

Thanks to all my testers for helping me polish the hack and fix issues!

Thanks to anyone else I may have missed!
14

News / Re: Welcome to Our New Server! 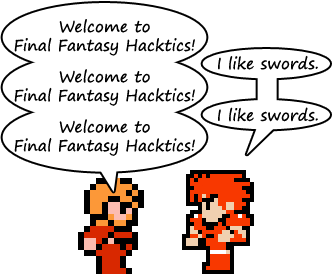 October 31, 2019, 04:17:14 pm
Tiny detail is tiny. That absolutely corrected the problem both with the file size not matching exactly.

And I just loaded the Worker8 scene without issues!

Thanks a bunch both Xif and Elric! Sharing your breadth of knowledge is always SUPER appreciated!
Could someone update Xif's original post here: http://ffhacktics.com/smf/index.php?topic=7457.0 with a note at the bottom, specifically mentioning to update the 01 bit and that it is not mentioned in the video?

Problem Solved
When manually expanding the vanilla ISO to match file sizes, the very last HEX bit should be changed to 01, not 00 (like all the rest of the padded values).

October 30, 2019, 10:01:37 pm
1. Yes, I extracted both copies from the same rar. I typically only use the one base image. I would expect things to break horribly when generating the PPF if I used different ISOs. But I should be able to APPLY the PPF to any vanilla ISO correct? I've tested this and this is generally true.

So I tried another quick experiment and applied one of my older patches to a vanilla ISO using a totally separate set of ISOs, the ones which I have been using this whole time before I found this issue, and it showed the same anomaly:
Vanilla 00 padded ISO: 552 701 184
Shishi expanded mod ISO: 552 701 184
Patched ISO: 552 701 179

What could cause the patched ISO to be 5 bytes smaller? (I'm hoping I'm just being dumb about something and it's an easy fix.)

Should I maybe try using the PPF Full Distibution zip on the Tools page? It looks like it has PPF-o-matic, but also some other tools that might work?

And good to know about the errors.

October 30, 2019, 07:56:54 pm
So I've been banging my head on this for a little while and tried multiple things from multiple directions and still can't seem to make headway, so I must be doing something wrong or its a known issue.

Context
I've been working on a mod for a while now and a new bug that I hadn't seen before.
I slowly eliminated all of my patch content, Attack.OUT / TEST.OUT modifications, ASM hacks, FFTPatcher data, FFTactext data... and both individually and combined I can make a working PPF that doesn't bug out/hardlock. I was able to narrow it down to Shishi seemingly being the cause when using a PPF.

So for my troubleshooting, when making a PPF I use...
Vanilla base image: manually expanded via HEX to match file size of patched image
Patched base image: vanilla image restructured using Shishi
The images are not modified in any other way.

Problem
For some reason, in pSX 1.13 (I haven't been able to replicate this in other emulators or even in pSX until recently), when any event loads with Worker 8, the game just says "Now Loading..." indefinitely. I can easily replicate this with any late-game save file by simply loading the Brave Story event "Steel ball found!" Alternatively if you go to the Nelveska Temple fight, after the Squad screen and the map name displays, the game just hardlocks at a black screen.

Note that if I open the Shishi expanded game image in pSX, the scenes will load and work properly.
However, regardless of which game image I use (shishi expanded or PPFed), I do see a number of errors in the psxfin console:


I have seen these errors before and they have typically been benign, but maybe I should be worried about them? For reference the true vanilla image does not show these errors during that particular scene.

Has anyone else experienced this sort of behavior? I'm at a loss for what I could be doing wrong. I've tried multiple vanilla game image bases in different "formats" (because I know it's all the same data, but i wanted to try) and can't seem to get a patch to not lock up the pSX emulator now. I even tried an older version of Shishi (483, currently using 492). I did a little searching on the forums, but couldn't find any results, but my search-fu might be lacking.

I hope this paints a clear enough picture. Any help or guidance is appreciated!

October 04, 2019, 07:47:59 pm
I just want to say thank you everyone for all your hard work and efforts. I know this was a ton of work and took SO MUCH of everyone's free time. I really appreciate the efforts and strides made to bring this to completion as far as it could be within the hardware limits.

Now lets see if I can break it so it can be further polished.