Works in Progress / The Last Title Was Stupid (Vanilla overhaul)

There are things to be aware of before downloading this patch.  This is a vanilla overhaul that will serve as the backbone to an altered telling of the game events.  This is also my personal playthrough version (i haven't made another yet), and as such Beowulf is a little ridiculous.  Orlandu does not join.  Cloud's attacks require an item that must be synthesized. I need to pick an oil fix to apply; one has not been applied.

Some sprites will swap in a couple events to a different sprite while moving around. This can be seen in Rad when he kneels during the first event. These should be rare, and happen when and event sprite doesn't match the sprite of the character. I have tried to keep these to a minimum. Meliadoul will be fixed in the next version. She's ugly in those events, i know.

JP scroll and item dupe glitches have not been fixed yet.

Mist works but does not display name or graphic. There is a fix for this on these forums that will be applied.

Shops carry very few items.  At first you are a low ranking cadet, then a criminal.  You cannot walk into town and buy military grade gear.  It can be poached or synthesized.  Random battles have had item drops added to help with this.
The following tables may look a little silly.  They are the ones i used for development and just cut lots of notes out of.  Prettier ones will come along.  When? I dont know.


"Innate" jp up: all skills have had their cost reduced by roughly 1/3 and gained jp up has been removed.
Monsters have access to all their abilities in battle, though the formation screen only shows their non-monster skill abilities.
https://docs.google.com/spreadsheets/d/19vyCiUNP81cVr_I5nEbR2LhnhkgOstWHyEGn0mjz05w/edit?usp=sharing
The synthesis shop is available in the fur shop at trade cities. The fur shops are now avilable during chapter 1, starting when you first get to dorter.
https://docs.google.com/spreadsheets/d/17QgxIaPcOdVkD9MhXs2mVz8HF4DbdRMNXr8ITjIOdW0/edit?usp=sharing
There need to be more ways to cure petrification; currently there is one (design oversight). Stigma magic will go back to having centered AoE, petrify status will be added to the list of moogle status cures.

After playing through, i will be altering the battles further, adding in some basic event edits, and toying with new event triggering and conditionals.

Possible application of snowflakes to have more variation and flavor in battles.

Though it may not work, testing having ramza's ch4 variant gain permanent boosts for mastering jobs, such as ghazi=move +1, monk=hp +100, spiritist=MA +1, etc.

There will also be a version made that is non-immersive and makes fun of Owlgwarlth (Algus) because I hate him.
When Mustadio joins, he has two snipe skillsets equipped. Just remove the secondary one. The skillsets have the same abilities.

The Barrage ability works but is not displaying unit hit animation or damage above the units when it hits. Not sure why yet.

Pressing Select to inspect the Yew Staff bugs out menus until leaving whatever screen you're on(shop, formation, etc).

Innate abilities on some items don't seem to be working.
First, thanks to all those who answered questions along the way, Xifanie, Nyzer, Raven, Celdia, Pride, Glain, Choto.
Secondly, I have used ASMs written by Xifanie, Glain, Pokeytax, Pride, Razele, possibly others, i hope i didnt miss anybody..
This mod utilizes the amazing Ability Requirements Hack and ALMA, Synthesis Shop, Raven's Workbooks, EVSP
The changed sprites are all found on this website in the Sprites section.
I would like to thank the community for their hard and amazing work, without those mentioned above, the coders, the tinkerers, the artists, none of us could do the things we do.  This really is one of the best and strongest modding communities I've been a part of.
LyingWar.ppf

Confirmed working on epsxe. Given the nature of hacks used, it may not work as well on better emulators.
Please feel free to give feedback.
There will be a version placed into completed mods section as a vanilla overhaul, based on community feedback, with better balancing.
This patch must be applied to an expanded iso.  This can be done in Shishi
2

April 23, 2021, 12:05:12 pm
Yes i had erroneously drawn the conclusion that unit id in events was tied to sprite id and managed to overlook unit id's existence in the patcher.

Thanks for yalls help.
3 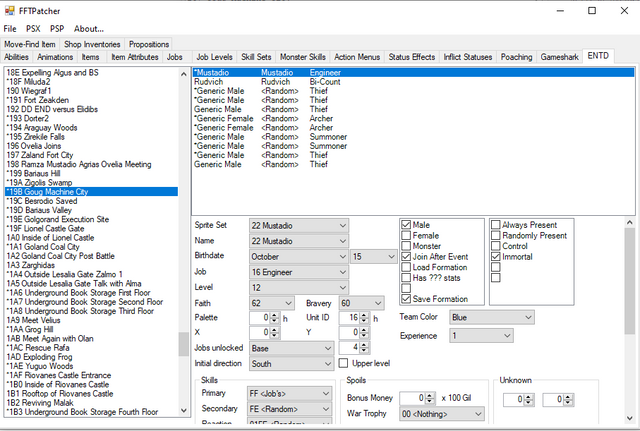 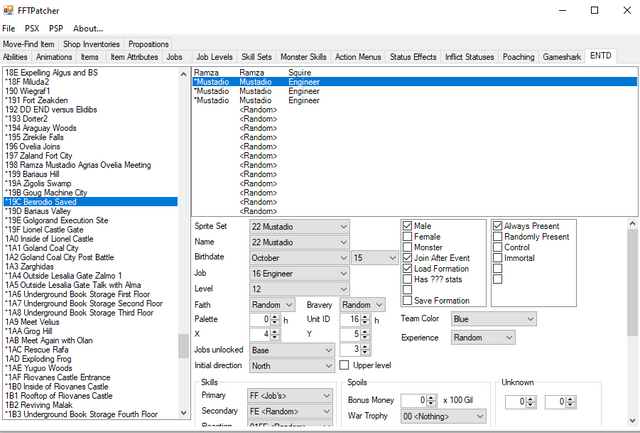 In the goug story battle, mustadio speaks but his sprite is off screen somewhere. Now is an unanimated rudvich during the event afterwards where mustadio reveals he has the stone. Screen fades and unfades. No prompt to join, mustadio not in formation screen afterwards.

Is there something going wonky because mustadio's job in those events is job 16 rather than 22? I should note that i didn't realize until a test playthrough that I DID NOT make the jobs' skillsets match, so perhaps that's it.
5

Glad for that because it wasn't critical. ARH and ALMA are still playing well together.

Once I'm done with testing I'll be releasing the patch for the community. It has a lot of redesigns, synthesis shop, unpronounceable item names. Fun stuff
6

So i finally got everything slapped together, and can go into more detail if requested, but here is the issue.

I'm using epsxe. It plays the opening up until the characters walk out of the door to begin the battle.

I know it's a longshot that somebody knows offtop what's going on, but figured I'd ask. Anybody have any idea what's up or how i can find out?
7

April 07, 2020, 11:16:49 am
This may not be possible, buuuut. Valk's trance terra sprite seems to use one of altimas slots. But I'd rather use this in an event without dicking up the final battle. There are sprites that i just flat haven't noticed in game, 40 yr old man, 20 yr old man, etc. But they're smaller than the trance terra sheet.

Is there a way to nuke a few of these that are beside each other and apply the sprite there? I'd imagine you'd have to change the memory location pointer for the next sprite in the list to not fuck everything after the terra sprite up, but I'm not sure if even that is feasible. Is this something that can be done?
8

As far as enemies, what I did to simplify it is make a second skillset past the generics in the list. Put the monster skills you want to see used by enemy blue mages in there. In ENTD, assign that skillset to the character directly, rather than letting it use the generic blue mage skillset. This will result in the enemy having all the skills you put in the skillset available in battle.
10

I tried that after shishi wouldn't open unit.bin. Did a quick scroll twice and didn't see it, then remembered I saw an export option in GG and tried that. So basically my own impatience is why shishi didn't work.
11

So you alter the image as normal: setting it to 4bpp, no dither, type A.  Then click the down arrow by palettes and removed unused colors.  Saving this will result in the issue I am having. Rather:
Choose to export the image with these options.
Type: Multiple Files (Combined File will not work)
File Name: doesn't matter
Prefix: whatever you want to name your file
Filetype: *.bmp
Alpha Channel: output as BMP
Trim: leave this unchecked
Frame options: leave this unchecked

PSX FFT Hacking / Re: How to use FFTastic, cannot find save game

Quote from: Punkioinapit713 on March 17, 2020, 01:18:33 amHello I just patched my FFT with The Lion War and the tried to play it on ePSXe and when I load up the ISO it just goes black and then crashes. I haven't patched it with anything else and I follow the direction of for the patch on a youtube video.. Not sure what I did wrong ,but that's what happend....

First I'd try it on a couple different emulators because TLW is stable. Epsxe is far from perfect, BUT its imperfections do allow things like ALMA that have potential load delays to work better. That said, tlw worked on epsxe for me.

I know it can seem frustrating when you don't have full understanding of applications and interoperability, but once you work through these issues you're experiencing, you'll have greater understanding to apply to all sorts of none fft modding scenarios. Just keep at it and don't get discouraged.
13

I always thought it was fftevgrp only for formations and portraits. I'll give this a go today and report back. Thanks for the heads up.
14

March 16, 2020, 01:05:45 pm
Using Graphics Gale. I have snipped my formation sprites from their spritesheets.  I go to All Frames pulldown menu, select Color Depth, select 4bpp.  I click the down arrow in the palette window and select to remove unused colors.  I save.  All this is done with GG running as administrator.  I reopen the image in GG without closing GG and see it still shows 4bpp.

I go to FFTEVGRP and attempt to import the formation sprite.  I get the error message that it is not a 16 bit image.  Back to Graphics Gale and it still shows 4bpp.  Close GG and reopen it and it shows the image back at 8bpp.

Am I missing a step somewhere or doing something wrong? Anybody have any insight into this?
15

PSX FFT Hacking / Re: Where do I start? Is it PSX console or PSX emulator?

War of the Lions Hacking / Re: Need help getting LionEdit to work...

PSX FFT Hacking / Re: Where do I start? Is it PSX console or PSX emulator?

Documentation doesn't state it does and only has instructionsfor psp. Admittedly i never tried, but I assume it doesn't.

Isn't there an editor for psx though? Fftastic or something like that?
18

New Project Ideas / Re: Is it impossible to eliminate RNG in the game?

There's an asm hack that allows the two unknowns for items in fftpatcher to reduce damage by %. I forget who wrote it, but it's in one of the hacking threads linked in Important Links! Check Here First! thread in the PSX Hacking section of the forums.
19

March 04, 2020, 09:41:41 am
Cool thanks. And the weird behavior was that he wasn't set as guest, screen would do the fading like the prompt-to-join window was going to pop up, but it never did. Screen just unfaded then i had unusable permaguest mustadio.

Just clarifying more in case anybody else sees this behavior.
20

War of the Lions Hacking / Re: Need help getting LionEdit to work...

March 03, 2020, 06:17:32 pm
Did you change the file name? Should extract something like FFT.SYS or FFTA.SYS (typing this from memory as i drive), then rename it to lioneditor.bin, edit this in lioneditor, rename back to FFTA.SYS, import back into your save file.

Edit: please do not make multiple topics for the same issue. Keep it in one thread.